The NYHQ fledgling is making progress after fledging its nest a week ago. Its mother has managed to convince the fledgling to chase it into Kissena Park Corridor and away from the hospital and busy streets below with the promise of an immature Robin yesterday. The fledgling greedily snatched it up and ate it quickly atop a fence overlooking a community garden. 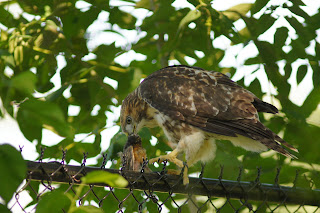 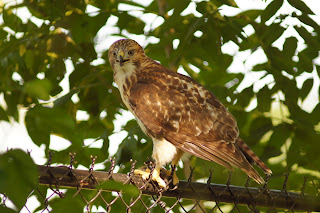 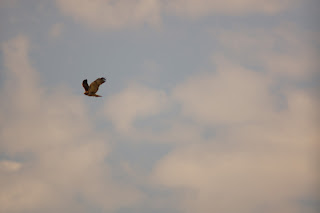 Mom watches from above
at 10:03 PM No comments:

The mother from the IDCNY nest in Long Island City was found grounded and in distress this past Thursday (6/28). Animal Control of Queens caught her and brought her too Bobby and Cathy for rehabilitation. She passed away from an unknown illness this weekend and will be sent to a state lab for a necropsy. Her son, the fledgling that fledged prematurely is doing well in rehab and is set to be released soon.

This nest is located in one of the worst spots I have ever seen hawks choice to raise their young. There is very little green space in this industrial wasteland, and car and train traffic from the street and train yard below were a constant worry for me as I wondered how difficult it was going to be for this young hawk to fledge and stay out of harm's way. Thankfully caring people were there to watch him on a regular basis and his failed attempt to fledge was noticed and he received the help he needed. Thanks to Susan Houston and Dr. Reed at Laguardia Community College for keeping track of the hawks and being there in their time of need. 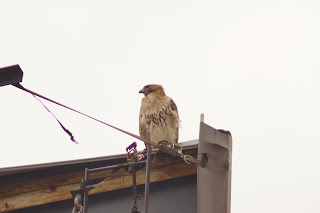 As of 6-28-12 all the hawks from the 6 nests I have been keeping up with are fledglings. In total there are 11 fledglings (Astoria-3, Flushing Meadow-2, Woodside-2, St. John's-2, NYHQ-1, IDCNY-1). The IDCNY fledgling injured itself last Thursday trying to get back to its nest, the day after it fledged and ended up on the sidewalk. It is in the care of Bobby and Cathy and will most likely be released early next week as it did not sustain any major injuries. Its mother was also found to be ill, possibly with Frounce. The mother is also in the care of Bobby and Cathy and will hopefully make a full recovery. All other fledglings and there parents are well as far as I know.
at 5:29 PM 1 comment:

This past Tuesday I visited the NYHQ nest to see if the solo eyas there had fledged yet, and indeed it did. When I arrived it was on the roof of the hospital with its mother nearby. After about an hour there the fledgling decided to test its wings and landed safely in a tree one block away. 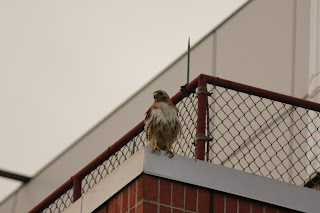 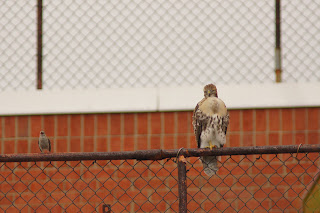 The fledgling gets an (un)friendly visit from a Mockingbird 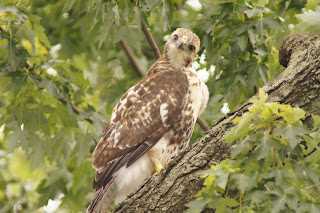 The eyas at the IDCNY nest in Long Island City, Queens fledged prematurely by at least 7 to 10 days this evening at 5:20 P.M. I was on my way home from work when I passed by the nest area (without my camera of course), when I spotted a hawk in the air and almost immediately new something was wrong. For a split second I thought it was the mother heading from the nest to her favorite billboard to perch when I noticed the hawks struggling to gain its composure and stay airborne. Despite its struggle, it landed safely on a billboard several stories and maybe 150 feet away from the nest. This is the third fledging I have witnessed and by far the most spectacular and nerve-wrenching. I feared greatly for this bird when it fledges cause of the rough environment it is born into in an industrial area in LIC. Urban Red-tailed Hawks never stop surprising me with their strength and courage living in a harsh urban environment. 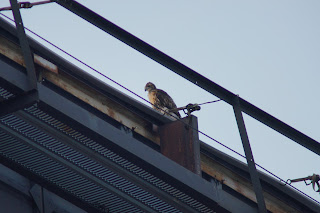 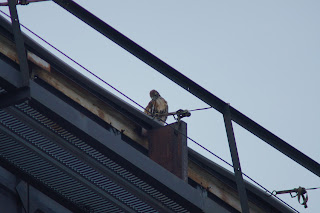 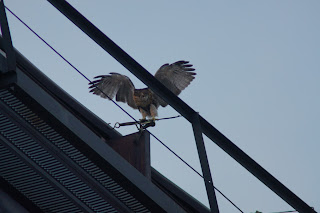 Pictures from this evenings visit to the NYHQ nest. 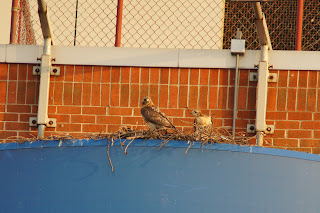 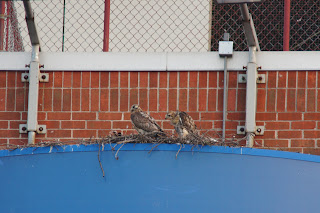 Links To Other Bird Or Nature Websites